William Slater hailed from South Carolina, lived and taught in New York City in the thick of the sixties, and found his final home in the rainy Maritime northwest during the seventies.

Mark Rothko, a friend, had been an early influence, and Bill carried that field of gauzy color and transplanted it into the rich mud of the Skagit Valley. There he became a much admired and influential painter in a community full of painters. His keenness for drawing allowed him to move in and out of many genres and subjects: landscape, figure and still life, animating his work with a sense of joy and discovery.

By turns introverted, then gregarious, urbane and country-simple; both mother and father to his child, industrious and then still as a stone, William Slater’s life was nothing if not organicly woven of whole cloth. He could paint while making coffee for a guest who might stop by his studio, or refuse at times to see even the best of friends. He would explain that choice by saying “The tide comes in and the tide goes out.”

He was a student of tides. He was a consummate sailor. What seemed like such mastery came from the understanding he was master of nothing but the ability to perceive the present moment and find within it an opportunity to dance with that circumstance. To trim a sail deftly, to see a passage emerge from fog, this was his art. Or to know the moment to let a painting be.

William was fascinated with mythology and the ideas of Carl Jung. His imagery often suggested a life deep beneath reflected light. Self effacing, he nonetheless was free in sharing his mastery with others.

William Slater made passage in July of 2007.

Gallery Cygnus is proud to offer “Zipper Cloud” and the paintings below for sale.  Please call the gallery, 360 708 4787, for sales information. 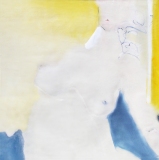